After leaving Undarra Lava Tubes our next stop was Mt Surprise where we stayed at a very nice Caravan Park - only $16 per night for a powered site.  Wow!  There were some shetland ponies and a pet brolga in the paddock next door.... 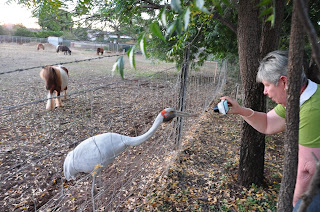 who liked cameras and toes as well as a pet emu on the other side.
It was from Mt Surprise that we caught the Savannahlander Train to Einsaleigh 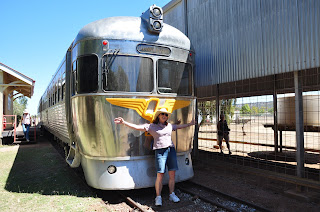 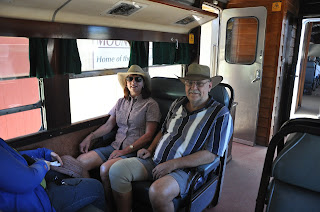 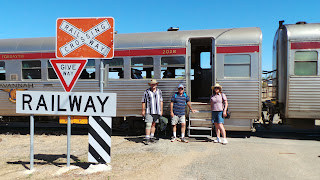 Disembarking at Einsaleigh - note the platform!

After having a very cold drink at the Einsaleigh Hotel (it was a hot day) we boarded the bus (?) for the Copperfield Gorge (a distance of about 500 metres) 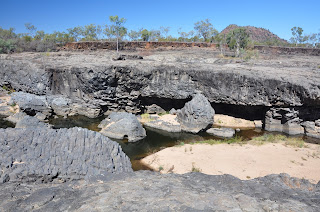 Copperfield Gorge is a very thick basalt lava flow through which the Copperfield River has cut a course. 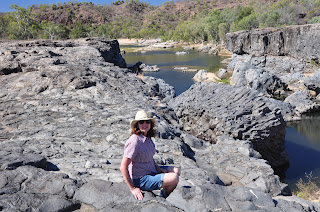 After having a look at the Gorge it was back on the bus to return to Mt Surprise.  We stopped for smoko (Billy Tea) on the banks of the Einasleigh River. 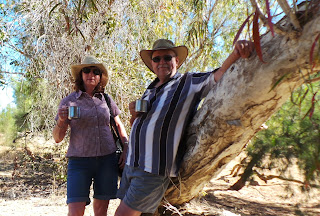 Then it was back on the bus and on to Mr Surprise - some very bad corrugations on this road which is a short cut (???) to Mt Surprise.  I glad it wasn't our vehicle.
The next day it was on to Georgetown.  We stopped at the Information Centre and next door to the Information Centre is the Ted Elliott Mineral Collection.  Really well worth seeing although we only had a pretty quick look as the air-conditioning had broken down and it wasn't officially open.  Also the young lady in the Information Centre wanted to get to the post office as it was Friday and they only get mail delivered on Mondays, Wednesdays and Fridays. The next day we travelled down to Cobbold Gorge.   Somewhere where I was really looking forward to going.
We went on a guided tour - the only option. We boarded a 4WD bus at the lodge and travelled a short distance to the start of the Gorge.  Before going for a boat ride up the gorge we went for a walk around the area where the guide explained various plants and their medicinal purposes etc and also how the gorge was formed. 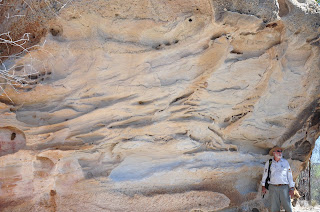 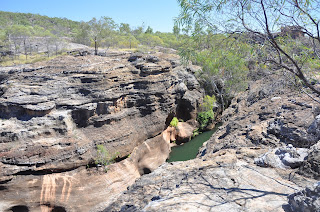 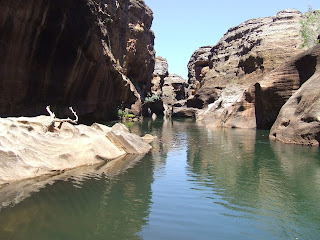 We travelled up the gorge in an electric boat which was really quite (and very narrow to fit through some parts of the gorge). 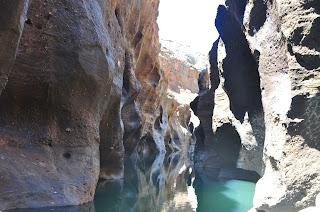 Some of the narrow sections. 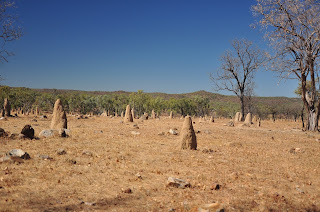 Some of the country side around on the way to Cobbold Gorge - this is near Forsyth.  There are lots of these termite hills everywhere.  They are not made by our usual termites which eat houses.  These termites are seed gatherers and they apparently are very useful in improving the soil quality.  They also eat the bad ants!!!

After leaving Georgetown our next camp was at Leichhard Lagoon about 20 kilometres south of Normanton where we based ourselves for the net four days. 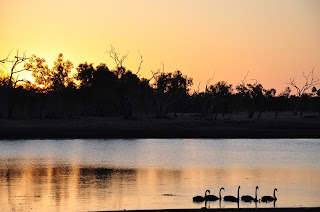 Sunset at Leichhardt Lagoon.
There were lots of pelicans, black swans and whistling ducks on the lagoon. 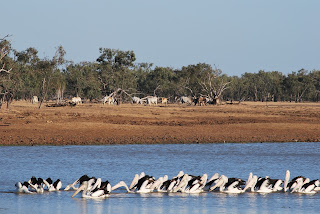 We watched these pelicans for ages.  They were having a real feeding frenzy but it was almost like they were synchronised  swimming.  It was a bit hard to capture in a single photo.
We went into Normanton and booked our ticket on the Gulflander train and arranged to be picked up at the Glenore Station which was just across the highway from Leichhardt Lagoon. 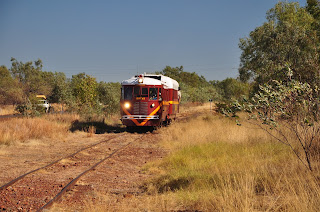 The Gulflander pulling into the Glenore Railway Station to pick up four passengers!  This is the railway station - no buildings!! 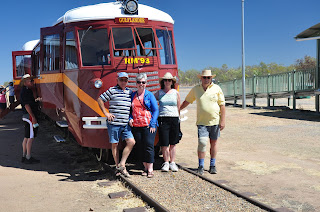 Our morning tea stop at Black Bull Station .....er siding.
The Gulflander is the only QR train that I know of that stops in the middle of nowhere just to let the passengers off to look at something that maybe interesting - to somebody............. 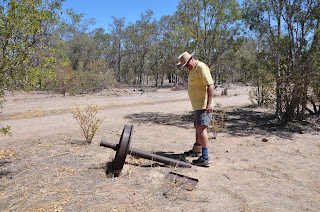 mmmh .... I wonder how that happened and where is the other wheel? 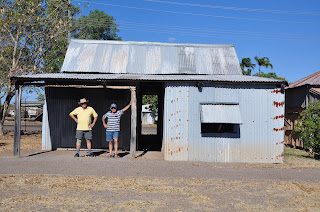 Phil and Barry have found a new house in Croydon.  Note the flow through air-conditioning!

This is actually at the True Blue Centre in Croydon which has a very good video on the local history and then out the back a good museum.  They also had lots of sculptures of kangaroos, emus and cockatoos around the area. 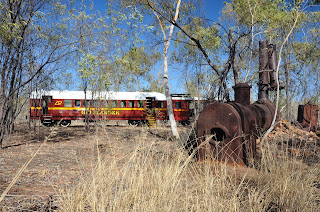 Another stop on the return journey to Normanton to look at some old mining relics just outside Croydon.
From Leichhardt Lagoon we headed for Karumba - our most northerly stop.  We had seen a few brolgas along the way but just outside Karumba there are some open plains (look like they maybe salt plains when there is a wet season) and there were hundreds of brolgas. 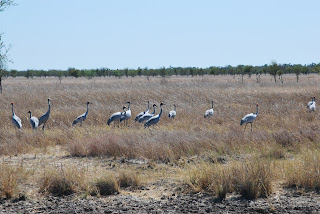 We arrived in Karumba about lunchtime Friday.  If you don't fish or if the weather is not good for fishing there is not a lot to Karumba.  Everyone, including people before we left home, told us that the fishing in Karumba is really bad this year so we decided to buy some prawns and champagne and go out to the point and watch the sun set over water (the Gulf of Carpentaria). 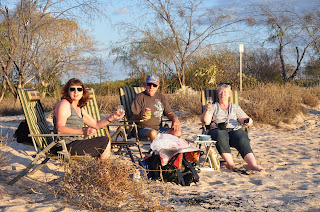 It is a tough life!   Champagne, prawns - the best I have eaten in a very long time - good company, beautiful view - what more could you ask for. 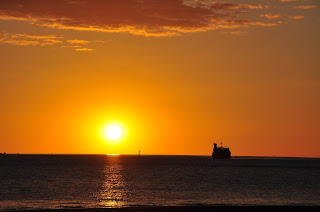 Twelve months ago I doubted I would be seeing this! 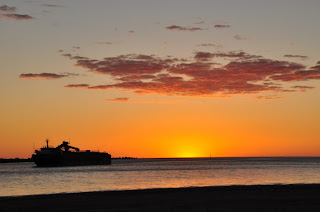 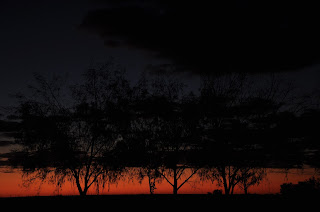 Tomorrow afternoon we are booked on the Sunset Cruise but those photos will have to wait for the next edition.  We leave Karumba on Sunday for Lawnhill NP.  We expect that it will take us a few days to get there - we don't want to overdo the travelling.  I am not sure how much internet coverage I will have before we reach Cloncurry or Mt Isa.