We are now back in Alice Springs after spending a very hectic day in the East MacDonnell Ranges and two days out in the West MacDonnell Ranges.  There is some amazing scenery around this area but I must admit that going back through my photos all the gorges and gaps are starting to merge into one. 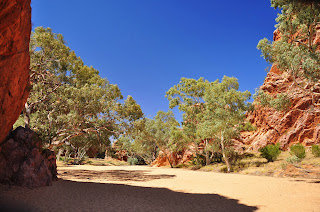 This is Emily Gap about 10 kms out of Alice Springs in the East MacDonnell Ranges.
Then there is ....... 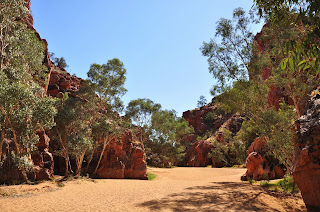 Jessie Gap about a further three kilometres east.
We then decided to go out to Standley Chasm in the West MacDonnell Ranges to catch the mid-day sun.......(with about 100 other people including a bus load of high school kids).... 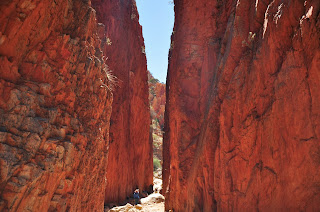 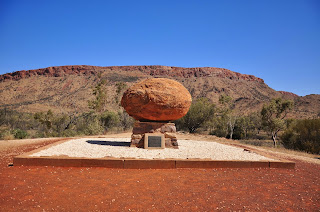 Flynn's (of the Outback) Grave.
This is the final resting place of John Flynn the founder of the Royal Flying Doctors.  He was an amazing man and a very forward thinker for his time.  He did a lot for the people of central Australia and the outback including outback Queensland.
The next day was our big day out in the east MacDonnell Ranges, starting with.... 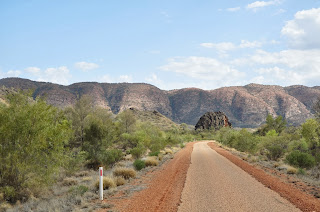 Corroboree Rock.
There are lots of these 'rock walls' in both the east and west MacDonnell Ranges.  They are very narrow and vary in length.  It really does look like they have been built by someone. 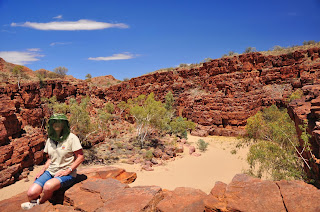 Next stop was Trephina Gorge.  These gaps and gorges are very pretty with their white sandy creeks and high red cliffs.  We, Barry, Gwen and myself, did the cliff top walk which was across the top of the red cliffs on the right of this photo.  Phil did the easy option of walking up the creek.  His knees have been good but he has not chanced any climbs to the lookouts or 'moderate' rated walks, although he has done a few where the walk has been down the rocky creek bed.   The flies have been really bad at times so we have had to resort to wearing our fly nets.  A real fashion statement!!  At least they do keep the flies off your face. 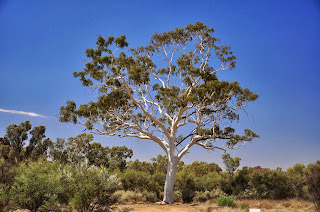 There are lots of these Ghost Gums in the MacDonnell Ranges and really make the scenery with their white trunks and green leaves. 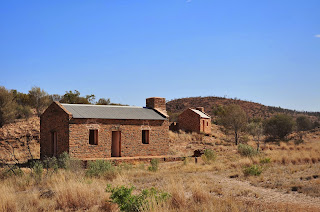 Arltunga Historical Reserve.
These are the Government Building of what was a gold mining town.  The ruins are very spread out and I would expect that most of the buildings were not much more then poles and canvas with the only substantial buildings being those the government built such as the Post Office, Government employees  residences, gold office and police station which was some two kilometres further on. Some of these have been restored but there are lots of ruins around as well. 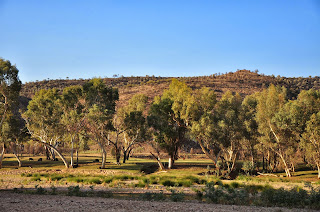 This is the Ross River on the road into another gorge which we didn't continue into as it was getting late and it was about 11 kilometres on what is described as a 'high clearance 4WD track'.  Our experience with the roads around here is, if they described it as a 'high clearance 4WD track' that is exactly what they mean.  There is also a resort, the Ross River Resort here which we called into.  It was lovely as the caravan park part was right on the river which surprisingly had water in it.  Some of the rivers do have permanent waterholes which are spring fed but most are dry.  We have been surprised at the lack of wildlife we have seen.  They say it is because of the dry and feral cats - I think it maybe the latter as even around the permanent waterholes there is not a lot of wildlife.  We have seen some rock wallabies out at Simpsons Gap but that has been basically it. 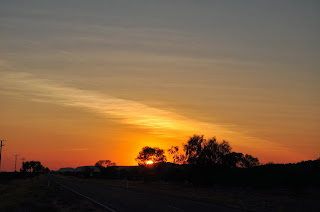 I captured this beautiful sunset on the way back into Alice Springs from the East MacDonnell Ranges. 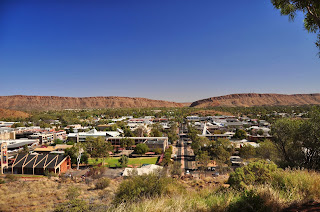 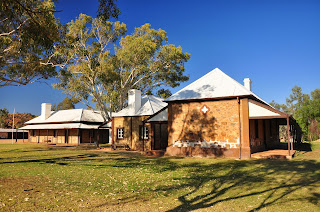 These buildings are at the Old Telegraph Station at Alice Springs. Most of them have been restored.  They even have some school children come out to stay overnight or for the week-end and they have to live as they did in the late 1800's.  When we went into the kitchen area we could smell the kerosene from the kerosene lights.  What a great education for our kids of today!!  No ipads or iphones or even TV.
The building are really well maintained and they have allowed the ghost gums to flourish around the buildings.  They also have kept the lawn green and outside of the precinct they have barbecues and picnic tables -it is right on the river bank.
The next day we packed up and headed out to the West MacDonnell Ranges. 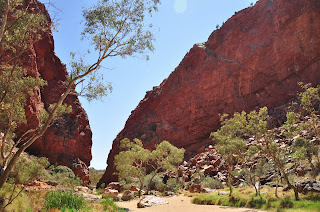 Simpsons Gap.
This was our first stop - it is only 18 kilometres out of Alice Springs and is the only place we saw the rock wallabies. 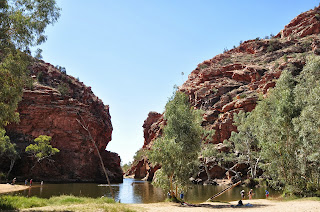 Ellery Creek Big Hole.
A lot of people were swimming here but the water was very cold and didn't look too inviting.
Our first night out in the West MacDonnell Ranges we stayed at a free camp at a lookout. 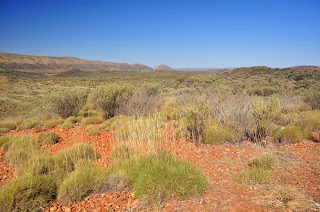 The view looking east from our caravan at the free camp - not bad eh?  And it was very quite and you could see million of stars. 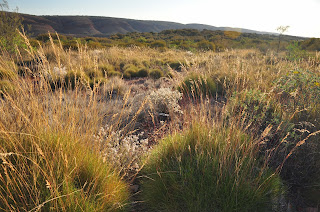 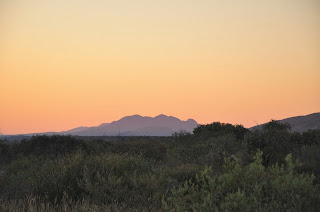 The blue mountain in the background is Mt Sonder which you could see from just about everywhere and it always looked blue. 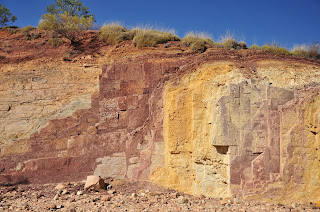 The Ochre Pits - apparently this is where the local aboriginals got (get) their ochre for ceremonial   purposes and  which they also traded with other tribes. 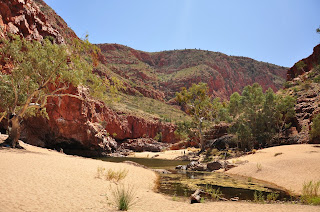 Ormiston Gorge
I think this is one of the prettiest gorges and certainly has the best walking tracks. 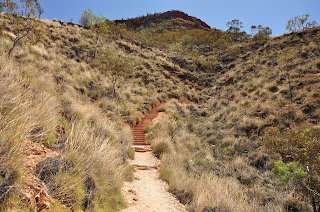 The track up to the Lookout at Ormiston Gorge - note the stairs!  This is what I call civilised bush-walking. Not at all like the climb up to the lookout at Standley Chasm which was a goat track and very steep.  Only Gwen and I attempted it. 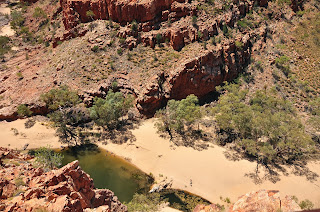 Looking down into Ormiston Gorge from the Lookout.  If you look really hard you will see Phil sitting in the shade of the big ghost gum on the left of this picture. 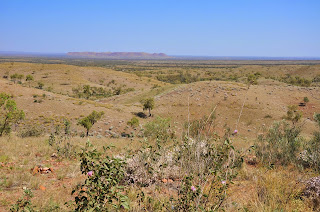 Tnorolo/Gosse Bluff.
Actually it is a the inner rim of a crater - the result of a meteorite/comet crashing into Earth some 142 million years ago.  They claim that the energy created by this crash was some 100 million times greater then that created when the atomic bomb was dropped on Hiroshima. It certainly would have given the Earth a good shake up! 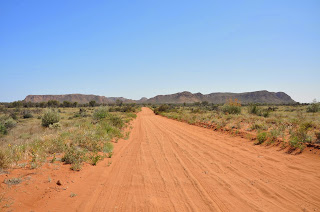 The road into Gosse Bluff.
It was very corrugated and rough in parts but there were lots of wild flowers and many different varieties. 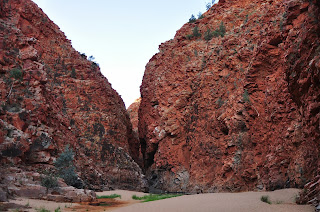 Redbank Gorge - pretty original name.  This one was very narrow, even more narrower then Standley Chasm. It had water in it also.  It was very late when we got to this one and it was about 8 kilometres of very rough road into it.  We didn't have a very good look around here as we had one more stop before going back to our camp at Glen Helen Resort.  The country around here was very stark and rough too - a bush fire had gone through parts of it not long ago which didn't help. 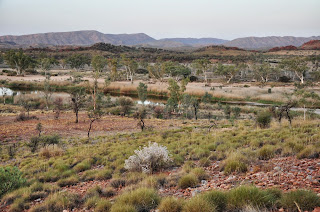 From Mt Sonder Lookout.
This scene looks like so many paintings I have seen of this area.  It is really beautiful.  That is the Finke River in the foreground with water in it - one of the nine permanent waterholes in the Finke. 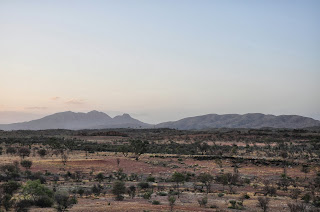 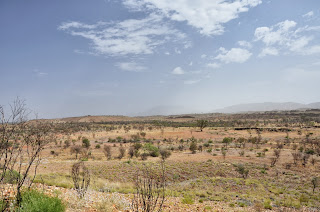 This photo is of the same scene as the one above - it is taken the next morning when we were in the middle of a big dust storm.   Where has Mt Sonder gone?  If you look hard you can just see the outline.   Later that day we also had thunder and a little rain.  The first since leaving the Atherton Tablelands. 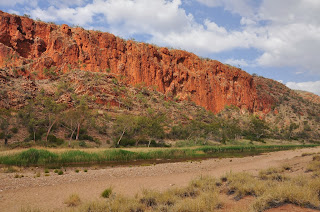 Glen Helen Gorge.
These cliffs are just behind the resort. 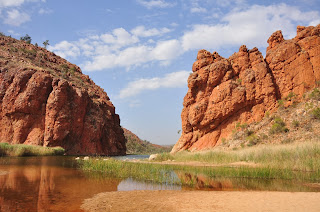 ﻿
The Glen Helen Gorge.
One of the few places where you read the aboriginal dreaming story about the land and it is a happy story.
Tomorrow we leave to go to Uluru.  We are taking two days to get there and our plan is to stay there for about 3 to 4 days.
﻿